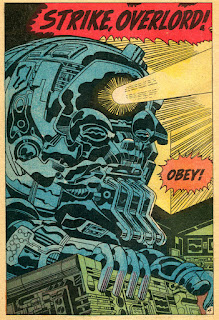 The release of the film The Avengers is a big deal in the hybrid world of film and comic books.  It is an attempt to bring together multiple film franchises into one massive adventure, and emulate the publishing pattern of the comic books these films draw inspiration from.  The Hulk, Captain America, Thor, and Iron Man have all been turned into very successful films, and one cannot doubt that bringing these elements together is a sure-fire way for Hollywood to make hundreds of millions of dollars.  In addition to being members of the Avengers, these characters are also distinguished in that they were created in large part by two guys: Stan Lee and Jack Kirby.

Stan Lee has made a real name for himself and has successfully capitalized on his involvement with Marvel Comics, expanding recognition of his namesake beyond the insular world of the comic industry and its fan base.   Jack Kirby was perhaps more reserved, and as a result is less of a household name outside the comic book world.  That is a real shame, because Kirby was (he passed away in 1994) one of the major driving forces behind the comic book form since its inception in the late 1930s-early 1940s.  Early in Kirby’s career, he was partnered with Joe Simon, another artist and writer, and together they created Captain America, which was a sensational character that fought the Nazis before the United States even entered the Second World War!  Afterwards, Simon and Kirby went on to expand the comic form into every genre, from crime to romance to war, all of which was done with a great deal of skill.

Simon and Kirby worked together throughout the 40s and 50s with great success, until Kirby was drawn back toward superheroes in the early 1960s.  It was during this period that Kirby, in his dank little basement studio filled with cigar smoke, churned out stories and artwork that would form the unshakeable base of Marvel Comics.  Instead of Joe Simon, Kirby was partnered with Stan Lee, and together they developed the concept of the flawed super hero, reflecting the struggles of puberty with the struggles of super-powered people learning how to use their gifts to help others.   In essence, Lee and Kirby captured the young adult experience like no other comic book creators before them, what the old cliché calls catching ‘Lightning in a Bottle’.  Kirby was instrumental in creating the X-Men, the Fantastic Four, Spider-Man (he did not illustrate the book, but was involved in his creation), the Mighty Thor, the Incredible Hulk, and Iron Man. 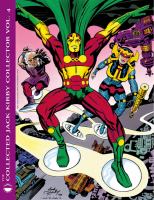 Eventually, Jack Kirby would part ways with Stan Lee and Marvel Comics, and began to work for rival company DC Comics.  At DC, he created a massive epic that would become known as the Fourth World series.  Encompassing several ongoing series (all written and drawn by Kirby himself), the Fourth World tells the story of the New Gods, beings possessing amazing technology that are locked in planetary war and family feuds that rival any work of great literature for thematic complexity.  While the initial sales for Kirby’s Fourth World books were low, the concepts would be harvested for the next few decades by other creators, and would go on to inspire creators in other media as well.  An example of this is the concept of an all-powerful energy field that is harnessed by the characters in Kirby’s universe to achieve amazing feats of strength.  Kirby called this “The Source”, which was tweaked by George Lucas for Star Wars and called The Force.  Also, much of the drama of the Fourth World was driven by a father-son divide between the evil Darkseid, ruler of the planet Apokolips, and his estranged son Orion, who was a crusader of good.  Strong parallels can be drawn between how Kirby established this story, and how Lucas developed the relationship between Luke Skywalker and Darth Vader.

This explosion of ideas and slate of characters would go on to net billions of dollars in revenue for Marvel and DC comics over the next four decades, spanning massive amounts of merchandising, film, cartoons, and various other titles.  In contrast, Kirby would struggle financially for the rest of his life, but never slow down his output.  To comic fans, Kirby was recognized as an under-appreciated genius who was used and abused by the growing corporate structure of mainstream comics publishing.  He came to be referred to as The King of Comics, a title that apparently made Kirby himself uncomfortable.

As time has passed and Kirby’s legacy lives on, much of his work has been collected and reprinted numerous times.  AVRL, as well as many other library regions, have developed collections of Kirby’s work.  If you want to see how the modern comic came to be, or where the successful film franchises of the past decade or so have come from, do a search of our catalogue and check out the work of Jack Kirby in titles such as The Simon and Kirby Library. Crime , The collected Jack Kirby collector, or Captain America : the classic years.  The excitement of his artwork exploding off the printed page, or the dazzling stream of ideas that he produced during his lifetime of creating comics are there for all to discover.