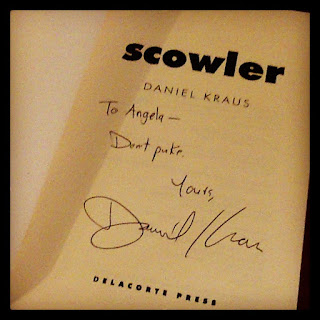 First off, Happy April Fool's Day! I really, really wanted to play a trick on the blog, but instead, I'm going to share my love for Twitter.  If you don't know about it, Twitter is a social networking site that limits posts to 140 characters.  If you aren't Tweeting, try this sometime: say something witty and pithy, using ONLY 140 CHARACTERS.  It is challenging! Some teachers are using Twitter for writing exercises, and I can understand why. You have to really use just the right word, and you have to THINK about what it is you want to say.  But honestly, that's not the main reason I love Twitter. Being a stay-up-past-my-bedtime book fanatic, I love Twitter for the interactions I have with the authors of the books I so adore.

I read Cathy Marie Buchanan's (@CathyMBuchanan) lovely new novel, The Painted Girls, and Tweeted about how much I enjoyed it. She replied to me! She even retweeted one of my Tweets! And followed me! (For those of you unfamiliar with Twitter, a "retweet" is when someone reposts your Tweet. Exciting!) Ok, so maybe that is not earth-shaking to some of you, but I had a personal interaction with the author of a book I really enjoyed.  When was the last time you did that?  I follow many authors on Twitter, and I feel like I know something about them. For instance, I found out that Elizabeth Wein (@EWein2412) was a huge fan of the show Flambards when she was in High School, because I tweeted that watching it made me think of her book, Code Name Verity.  Yes, some of them Tweet about breakfast, the TV shows they watch, their chickens, their travels, and their political views. I find it fascinating. I also wonder when some of them actually write because they sure do Tweet a lot. Those who follow YA author Maureen Johnson (@maureenjohnson) know what I mean!  I can also keep in touch with authors that I have actually met or worked with:  I love hearing about @CarrieMacWrites and her adorable children, and @arthurslade posts all sorts of interesting tidbits.

I've also won things on Twitter. I've won 2 books and an iTunes gift card. Again, not headline news, but I now have a personally signed copy of a book from an author I really admire. @DanielDKraus sent me a copy of his new book Scowler because I loved his first book and Tweeted about it during a giveaway.  My winning Tweet: "I want Scowler advance copy...because Rotters nearly made me puke about 10 times."

@SavvyReader has a great 50 Book Pledge initiative on Twitter.  You pledge to read at least 50 books in the year, and you Tweet about the books you read. They even have a nifty bookshelf this year that you can use to track your reading. I love this new feature, and I love that I can write a quick review of the book – it comes in handy when I am recommending books to others! Check out my bookshelf here. PS – I've already read more than 50 books this year.  Refer to above paragraph. I stay up too late reading on a regular basis.

I've connected with other librarians on Twitter, too. I have many new librarian colleagues that I have never met, yet I feel like I know a bit about them. And when library conferences roll around, and someone organizes a Tweet-up (meet-up) in person, worlds collide! Internet becomes reality!

So if you've heard about Twitter, but haven't delved into the Twitterverse, now's the time. Follow me @annavalley and follow AVRL @valleylibs. See you in the ether.