I just finished listening to The Guernsey Literary and Potato Peel Pie Society by Mary Ann Shaffer and Annie Barrows . What a remarkable book to listen to, especially with the full cast of readers portraying the many characters in the story. This book, if you don’t know about it, is told in letters. Set just after World War II in London and the Channel Islands, it gave me a glimpse into post-war England that I had not before experienced in a book – and it also happens to be a book about the power of books.  It made me think about other books written in letters.  I loved those books too!


There’s 84 Charing Cross Road by Helene Hanff. Also about books, this one is a series of letters between a woman who is looking for out-of-print books, and a London bookseller. It is set between 1949 and 1969, so a bit of that post-war London feel is there. There’s also a great movie version of this book starring Anne Bancroft and Anthony Hopkins.

Alice Walker’s heartbreaking novel of two sisters is told through letters. If you haven’t read The Color Purple, you are missing out on a literary gem.  This, too was made into a film, starring Whoopie Goldberg and Oprah Winfrey.


Teen love is handled in letters and images in this brilliant book, Why We Broke Up by Daniel Handler and Maira Kalman. In addition to a letter describing why the teen romance ended, Min, the letter-writer, also includes a box of items that symbolize their failed relationship. 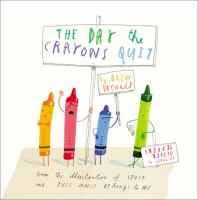 For the younger set, you can’t go wrong with Drew Daywalt & Oliver Jeffers’ fun book, The Day the Crayons Quit.  In a series of letters, the crayons explain why they are leaving. They are tired of being typecast, it seems. And just released is the sequel, The Day the Crayons Came Home.


What are your favourite epistolary books?