Ken & Deirdre, Leanne & Peter, Norris & Rita.  If these names mean anything to you then you are probably a Coronation Street fan.  Touted in the Guinness Book of World Records as the longest running television soap opera still in production, this British show has captured the hearts of Canadians.
Whether you have been watching the show for a few months or a few years, come on down to the Kentville Library at 95 Cornwallis Street on Saturday, January 21 from 2:30 – 4:30 for “Rover’s Return”.  The Library is planning a mixer for Corrie fans including trivia, games and prizes.  There will be tea and other traditional English treats. Feel free to dress up as your favourite character!
To get you in full Coronation street mode, why not check out some of our Coronation Street books and DVDs?  Try 50 Years of Coronation Street or Coronation Street: The complete Saga to catch up on the history of the show.  An Audience with Coronation Street DVD is hilarious and entertaining as we see the stars of the show perform songs.  You haven’t really lived until you see Steve and Liz sing a duet of Guns N’ Roses “Sweet Child O’ Mine”.  The Coronation Street Treasures book is a personal favourite filled with memorabilia from the show making it seem like a real-life scrapbook.
People remind me from time to time that it is only a show – that these are not real people.  To that I respond, “Yes they are.  I’ve been there and I’ve met some of them.”  Last year I took a trip to England and went on a tour of Coronation Street.  As you can probably tell, I’m a hardcore fan thirty years and counting.  I have walked the fabled cobbles and visited the set.  I was there when they filmed the scene of Jason’s birthday party in the Rover’s that they aired a few weeks ago.  I got to meet Norris, Julie, Sophie, Sian, and Ken – the man who holds the Guinness Book of World Records for playing the same character in a soap for over 50 years. Here's proof: 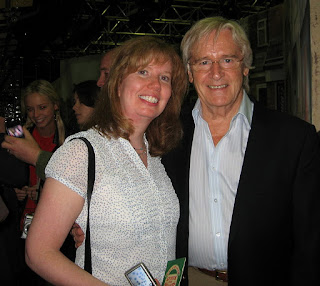 Speaking of Ken, a.k.a. Bill Roache, he is coming to Halifax in March as part of a cross country tour.  He’ll be at the Casino on March 23 & 24 and tickets are going fast.   More info on this event is available at Casino Nova Scotia.  Maybe I’ll see you there!
Last but not least, the DownEast Streeters is a Nova Scotia based fan club for Coronation Street.  Aside from “Pingfests”, they usually host an event with one of the stars each year.  I’ve had the pleasure of meeting Kevin, Ashley, Sunita, Molly, and Chesney at these events.  No word yet on who they are hosting this year but you can join their email list at DownEast Streeters.
--Frances Newman, Regional Librarian
Posted by AVRL at 06:30