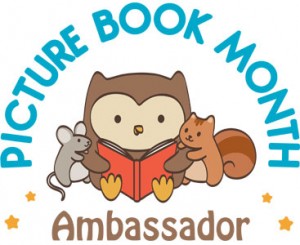 Picture Book Month is an international literacy initiative that celebrates the print picture book during the month of November. In this digital age where people are predicting the coming death of print books, picture books (the print kind) need love. And the world needs picture books. There’s nothing like the physical page turn of a beautifully crafted picture book.

If you’ve ever sat with a child on your lap, and shared a picture book, you know the magic that happens. Picture books are like a portable art exhibit, one with 32 pages of art to have wherever you take it. How do we celebrate Picture Book Month? Over at the ValleyStorytime blog, I  will be featuring new books each week this month. Our libraries will have loads of picture books on display. I will be hosting a “Best Picture Books of 2016” event at the Middleton Library on November 22. This event is geared towards adults who want to know about new picture books – we invite teachers, parents, grandparents, child care providers, university students, anyone who wants to see the newest and best books for kids. Bring your notebooks and make lists – picture books make amazing gifts for all ages!

If you can’t make it to any of these events, I’ve put together some great blogs you can visit for even more picture book ideas. I just love to explore these sites to find new and exciting books for kids (and, I admit, for myself). Picture books can be enjoyed by anyone, young or old. So dig in, find some new books, or share your old favourites. Just enjoy the magic of picture books this month! 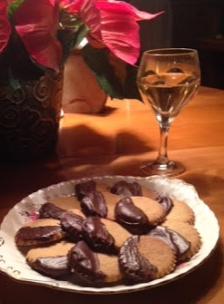 Ok! We know that Thanksgiving just happened, Halloween is near, and that special day of remembrance is quickly approaching. At Annapolis Valley Regional Library we observe all of those special days, but we are also preparing for the fifth year of The Twelve Days of Cookies to start off the yuletide season. That's right folks, time to start looking for great cookie recipes to share.
This annual event is entering its fifth year as a way to spread good cheer, let folks know about our great cookbook collection, and to show off your cooking skills. We won the 2014 APLA Library Advocacy Award for this project, and the cookie posts are some of our most viewed blogs each year.
By popular request, this year we are including our magazine collection as a recipe source as well. So dust off your baking hat and start perusing those recipes in print, eBooks or online. Beginning December 5, here on our blog, we will post a new cookie recipe each weekday (not on the weekend) and the branch location where you can sample cookies baked by our very own staff (if you get there in time).
We'll also have our contest again. You bake cookies with a recipe from a library-owned source and you could win a 'Cookie Gift Bag'!
It is going to be sweet, SO STAY TUNED!

Whether you are an amateur do-it-yourselfer, a service professional, or an aspiring automotive service engineer, Chilton Online provides reliable car repair information. Access 24/7 from your library, home, or on the go, all you need is you library card. A valuable resource, this database is the perfect alternative to those hefty manuals. If you are studying car repair, there are prep questions for the certification test. Nearly every make and model is covered, using an easy to understand menu that guides you to the information needed. Even if you are not doing the work yourself, the database is helpful in providing the correct terminology to help you do a better job of explaining the problem to your mechanic.
Know ahead of time how long the job should take. Take a test drive through this database and discover how easy and informative it is. Just search your make and model and go from there.
Listed below are some of the highlights of Chilton Online.
Login and see for yourself!
Posted by AVRL at 07:00 No comments:

We have received a wonderful gift from the family of Herb Lewis of close to 2,300 classical music CDs.  We will process this collection for public use over the next twelve to eighteen months.  Keep looking for it in our catalogue.
Charlotte Janes,
Systems and Collections Access Coordinator
-------
﻿
Herb was born in Montreal in 1929, and was the grandson of immigrants who had arrived from Eastern Europe in the early 1900s. His father, whose education was curtailed due to the Depression, was an insurance salesman, his mother a bookkeeper.  Despite their modest circumstances, both parents were ardent collectors, and Herb grew up amid objets d’art, paintings, fine china and antique furniture that often appeared one week and disappeared the next.  Their surroundings had a profound effect on all the Lewis children – Herb’s younger brother Stanley (a sculptor of note) and his sister Sheila shared his life-long interest in the art world.
Herb called himself a child of the ghetto, and lived in Montreal’s Plateau area as well as in Outremont once the family’s economic situation had improved.  He quickly demonstrated his intellectual gifts, speaking early, and at the age of two, simultaneously making 400-piece jigsaw puzzles, often upside down.  Herb was fascinated by the sciences while still a preschooler, and spoke of his father’s calm understanding when an explosion caused by an experiment gone wrong resulted in a minor fire.  He was sent to elementary school a year early despite his dyslexia and timidity, but had slightly more academic and social success at Montreal’s famed Baron Byng High School.  His classmates included future writers, artists, politicians and scholars, among them Mordecai Richler.
Herb was keenly interested in world history, and to his parents’ dismay, was intrigued by a number of radical campus political organizations. He read voraciously, and remembered everything.  He began to buy books, ultimately acquiring 8,000 volumes.  He entered McGill University at fifteen, but found little interest in his prescribed studies. He dropped out for almost two years, and thanks to two uncles who were musicians with the Montreal Symphony Orchestra, was given license to attend rehearsals at will.  His passion for music grew by leaps and bounds as he had the opportunity to familiarize himself with repertory, guest soloists’ and acclaimed conductors.  He returned to McGill with heighted maturity, ostensibly pursuing a path in comparative literature but spending much of his time auditing classes in architecture and medicine.  The sudden death of his supervising professor led him to philosophy and classical languages, of which he became a serious scholar. His master’s thesis on Ortega y Gasset earned him a cum laude degree in 1954.
Herb married Ingrid Weissler when he was twenty-one, and delighted in the arrival of his children Monika and Adrian.  He undertook further graduate work in philosophy at John Hopkins University but came home to explore a career in social work which he felt offered a more appropriate route to support his family. It was an unhappy decision that he reversed promptly with a return to academia.  In a characteristic burst of energy and enthusiasm, he completed course work along with a massive thesis on Aristotle within a nine-month period, attaining a Ph.D. from Université de Montréal with magna cum laude honours.
Herb and his family moved to Acadia University in Wolfville in 1959, where he headed the Philosophy Department for twenty-nine years.  He held the W.G. Clark chair until his retirement for medical reasons in 1994.  In 1972, he married Sara Lee Levitan and became the loving stepfather of Ira, Margo and the late Gina.
Herb’s years at Acadia were marked by his innovative approach to teaching, his rapport with students both in and outside the classroom, and his willingness to share his extraordinary knowledge of music, art, literature, science, philosophy, history, anthropology – and Asian cuisine - with friends, family and colleagues.  His wisdom, a legacy for all who knew him and studied with him, will continue to resonate on several contents, and the recordings and books he lovingly amassed are bringing pleasure to new devotees of all ages. Herb’s extensive collection of music notes and journals is now housed in the Special Collections library of Dalhousie University, and this past summer his diverse library of 700 art books found a new home at the Ross Creek Centre for the Arts in Canning, NS.  The Lewis family is particularly rewarded that the Annapolis Valley Regional Library has accepted their gift of Herb’s extensive library of CDs, and warmly thank the Library staff for their collaboration and efforts.
Sara Lee Lewis, C.M.
Wolfville, N. S.

Carry Your Library Card on Your Phone 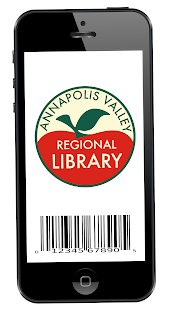 Do you sometimes forget to bring your library card with you when you visit one of our branches, but always have your phone?  Or, do you just have too many cards in your wallet?  Well, we have a solution for you.  Put your library card on your phone.
Download either one of these free apps, Key Ring or CardStar to your Android or iOS smart phone.  Add a new card, you won’t find us in the list of vendors so just add it as other and name it what makes sense to you.  During the process of adding the card, you will be prompted to scan the card.  The app won’t take the image of the barcode on the library card unless it is just what it requires, so the distance and resolution need to be just right before it moves on to the next step.
You may find these apps useful for adding other types of cards, you should check with the store or location where you use them to be sure they can read them from a phone.  We’ve just recently installed the equipment to make this possible in your local library.

Charlotte Janes,
Systems and Collections Access Coordinator
Posted by AVRL at 07:00 No comments: