Community Conversation: My Week on Welfare 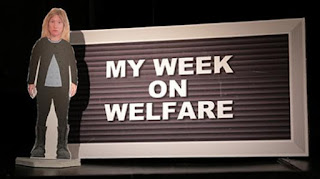 On Thursday, February 18, at 6:30 PM, the Windsor Regional Library presents the 45-minute documentary film “My Week on Welfare” and a discussion afterward with producer Jessica Brown and writer/director Jackie Torrens.  Free-will donations to Harvest House Community Outreach of Windsor will be accepted.

In “My Week on Welfare” award-winning documentarian, and former teenage welfare mother, Jackie Torrens explores stereotypes about welfare recipients by going back on welfare for a week. She finds out what the day-to-day reality of life is really like for people on income assistance in Nova Scotia in 2015. During her week-long stay, she discovers unexpected insights and encounters the complex issues facing those on the system. Produced by Peep Media, the team behind Edge of East (2015 Screen Nova Scotia nominee for Best Documentary).

“My Week on Welfare” explores stereotypes about welfare recipients, and is truly an eye-opening experience. Branch manager Cathy Lothian wants to get a community conversation started about this issue. She admits that her knowledge of this topic was really quite minimal until she saw the documentary.  By screening the film and hosting a discussion, she hopes to get the broader community talking and thinking about this issue.

February seems like the perfect month to host this, as here at Annapolis Valley Regional Library, this February is “Food for Fines” month.  We already have people thinking about donating food.  Branch manager Cathy Lothian wanted to host this screening after a patron had told her about how transformative the film was. The fact that producer Jessica Brown and writer/director Jackie Torrens have agreed to come to our library for this discussion shows that they really care about this issue. It is a chance for the Windsor and area community to have some real conversation about food security and social issues.
A storm date for February 23 has been set for this event.
Posted by AVRL at 07:00